The Neighborhood Ownership Model (NOM) is taking shape in FPSE as residents are taking back their streets and working together with police officers, prosecutors and judges to reduce crime.  FPSE residents Mark Barnett and Bob Purcelli spearheaded the NOM movement in the neighborhood.

The NOM consists of five teams:

Washington University Medical Center Redevelopment Corporation (WUMCRC) sat down to chat with Officer Jerod Breit.  Office Breit’s role will be to serve as liaison officer between the St. Louis Metropolitian Police Department and the neighborhood community.

“I see my role acting as the bridge between the citizen and the court process.  I will support the victims going to court making sure we can have a neighborhood order of protection against the criminal making sure s/he does not return.”

Every time a suspect is arrested in FPSE, Officer Breit researches every crime they have committed in FPSE and the City of St. Louis.  He will then go with the victim to the court and help them tell the judge how the crime impacts the neighborhood and ask for a neighborhood order of protection.  Officer Breit wants to make sure the feelings of the residents are heard.  As a resident of the neighborhood himself he is passionate about assisting the newly established NOM and states,

“Now is the time to become engaged.  Residents of Forest Park Southeast are given an opportunity to step up with the police department and take care of issues that collectively have a huge impact on daily living.

I both work and live in the neighborhood, and also patron the businesses here.  I am ready as a citizen, a police officer and someone who contributes to the economy in Forest Park Southeast to help eliminate crime here and make it safer.” 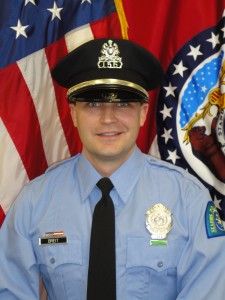 FPSE resident Mark Barnett also chatted with us to discuss his hopes for the newly established NOM in his neighborhood.

WUMCRC: Why do you believe the NOM will help FPSE?

Mark Barnett: I believe the NOM will help on two fronts. First, it helps residents get together for a common goal: reducing crime. By getting to know each other, we help build stronger relationships. By working on the common goal of reducing crime, we help make the neighborhood stable for residents, children, senior citizens and people who work in the neighborhood. Second, the work of the NOM helps an overburdened criminal justice system. Public budgets are hurting everywhere. We can become partners with police officers, social service providers and the court system.

W: Why is now a perfect time to start a NOM?

MB: We see more residents moving into and out of the neighborhood because of crime.  Some people moving out are long-time or even short-time residents.  Because of all the new faces, we need to build relationships.  We need to get to know each other.  By knowing each other, we build connections.  By building connections, we learn our common interests.  When we start to actively work toward a common good, we help lift and stabilize the neighborhood.  I believe our economic conditions are shaky at best right now.  We can’t let ourselves slip into instability because of the economy.

Interested in joining the movement to help make the neighborhood a safer place? There is a role for everyone: residents who are retired, college students, working full-time or part-time, they can create a spot for you that best fits within your availability.  Contact Gelinda Connell at Park Central Development at 314.262.4082 or email her at Gelinda@parkcentraldevelopment.org.