Alan Rowlson has been a resident of Forest Park Southeast since 2002 and over the years has seen the area undergo a dramatic transformation. He and numerous other residents now possess a new-found sense of pride in the neighborhood and are doing all they can to beautify and strengthen the area. As a result Alan has volunteered to help maintain and water the new WUMCRC-funded planters along Chouteau Avenue. We got a chance to talk with him and ask about his love of his neighborhood and gardening… 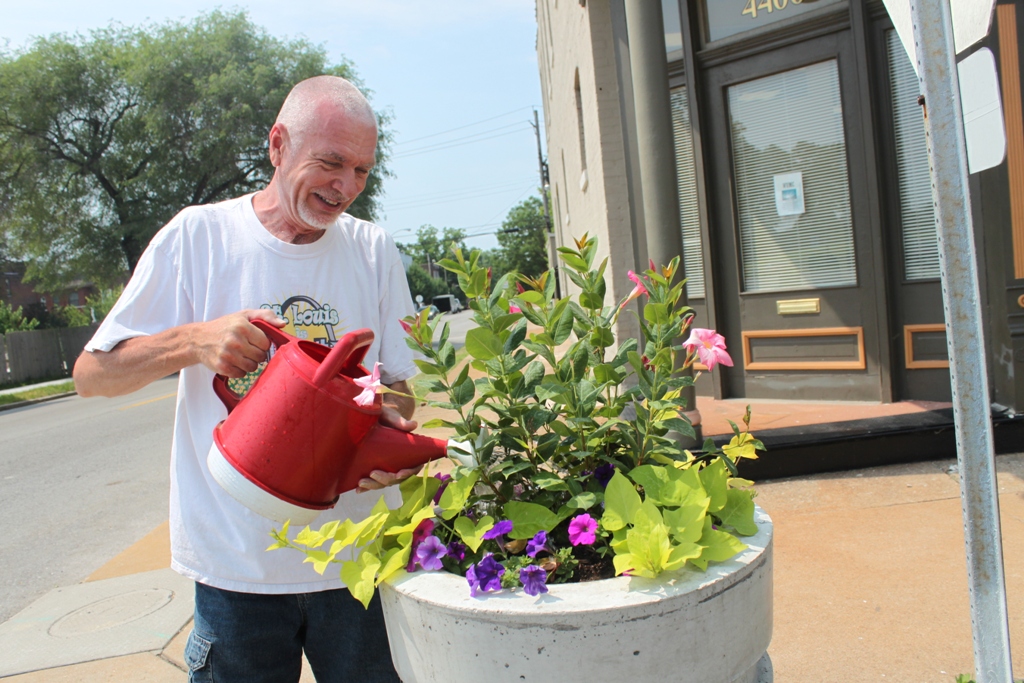 Alan Rowlson: As a child, both of my grandparents lived on farms, so I was exposed to planting and gardening early in life.  As an adult, I continued to garden because I like the connection it gives me with the Earth.  I’m a natural person and I feel it connects me to the Universe by touching the plants and getting into the surface of the Earth.  I’m also into beautifying urban settings.  Gardening in the city is a fun hobby for me and I like to create a prettier urban landscape for everyone.  It’s also the one time I can forget about stresses in my life because it’s a form of meditation for me.

W: What are your thoughts on what’s happening in FPSE?

A: In the years that I’ve lived here, I have seen several aspects of improvement.  For example, my street used to be a major drug selling block.  It was bringing gangs and violence into our neighborhood and the chaos was unbelievable.  Our street was party central on the weekends.  There would be 50-100 people in the streets causing a commotion, listening to loud music, dancing till all hours of the night.  They would hang out on people’s property as well as mine.  A general lowering of drug crimes and activity have significantly decreased.

Various groups, such as Washington University Medical Center Redevelopment Corporation (WUMCRC), have helped bring businesses into Manchester which is a good thing.  We need more diversification in our businesses here, but it takes time.  It’s so hard in this economy to start a business; I hope the new ones are here to stay.

The neighborhood does need more unification.  Our neighborhood group no longer meets.  All in all I like FPSE because it’s in the center of the city and convenient to many things.  I think the opportunity exists to make it even better than it is now.

W: What kind of impact do you feel new planters will have on the neighborhood?

A: The new planters and other beautification projects such as the newly planted trees on Manchester, the murals, and the community gardens make the neighborhood look prettier and more welcoming for the residents.  It represents that the residents are proud of the neighborhood they live in.  It also welcomes the visitors coming into FPSE.  Just as you want your house to look nice, you also want to present a good image for the neighborhood.

W: What do you think the planters say about the neighborhood?

A: It says we may not always be the richest neighborhood, but if people are interested, you can still have beauty and not succumb to the negatives, you can work on the positives.  Planting is one of the positives.  There are many different forms  positives can take, and beautification is one of them.