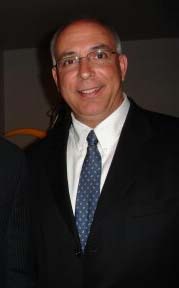 For Nicholas Georges, being a part of the Central West End runs in the family. His parents emigrated from Greece to the Central West End in 1955 where they began work in food services at establishments such as The Chase Park Plaza and Forest Park Hotel. In 1977, they invested in purchasing 3 parcels containing commercial storefronts, apartments, and parking on the corner of Euclid and Laclede. Since then, Nicholas has been a successful real estate manager and developer in the CWE area.

Nicholas is also dedicated to his involvement in the CWE by serving on a number of boards. He began his service in 2009 in a position that his father held on the CWE South Special Business District Board. He also represents the South SBD on the CWE Neighborhood Security Initiative Board. On these boards, they work to identify and implement projects that will benefit residents, businesses, and visitors. Recently, he was also appointed a board member to the newly established Euclid South Community Improvement District Board. Through the SBD, CID, and NSI, they have been able to bring many improvements to the area such as increased security, installment of way finders, and improvements to lighting, trash removal, planters, and sidewalks.