Some local news outlets in St. Louis have labeled the Groves, HandleBar a “Hipster” hangout, but we sent a WUMCRC staff member over there to get the real scoop.  HandleBar is known for their eclectic crowds and lively environment, but Owner Tatyana Telnikova believes they stand for so much more.

Telnikova, an avid cyclist, envisioned a restaurant and bar where riders could stop for a healthy bite or local craft beer along their route. Her vision has become a reality over the past 3 years and HandleBar is ready to celebrate their 3rd anniversary on September 1st.  HandleBar recently installed 20 new beer taps adding to their already impressive beer selection. They have always stressed the notion of supporting local craft brews. The bar top was just redone and now features a glossy finish over-top stylish bike gears.

The menu reflects Tatyana’s Russian heritage, incorporating Russian-inspired entrees with a slightly tastier kick. HandleBar offers many of the Russian classics like pierogi, pelmeni, and blinchiki, while also featuring some St. Louis favorites such as thin-crust pizza and cheesecake.

So I sat down with Tatyana for some of her personal favorites, starting with the Russian “Vinegrette”  Salad.  The traditional vegetarian salad is topped with beets, potatoes, carrots, greens & pickles served on a bed of arugula. The natural flavors of the Russian Salad is extremely refreshing. 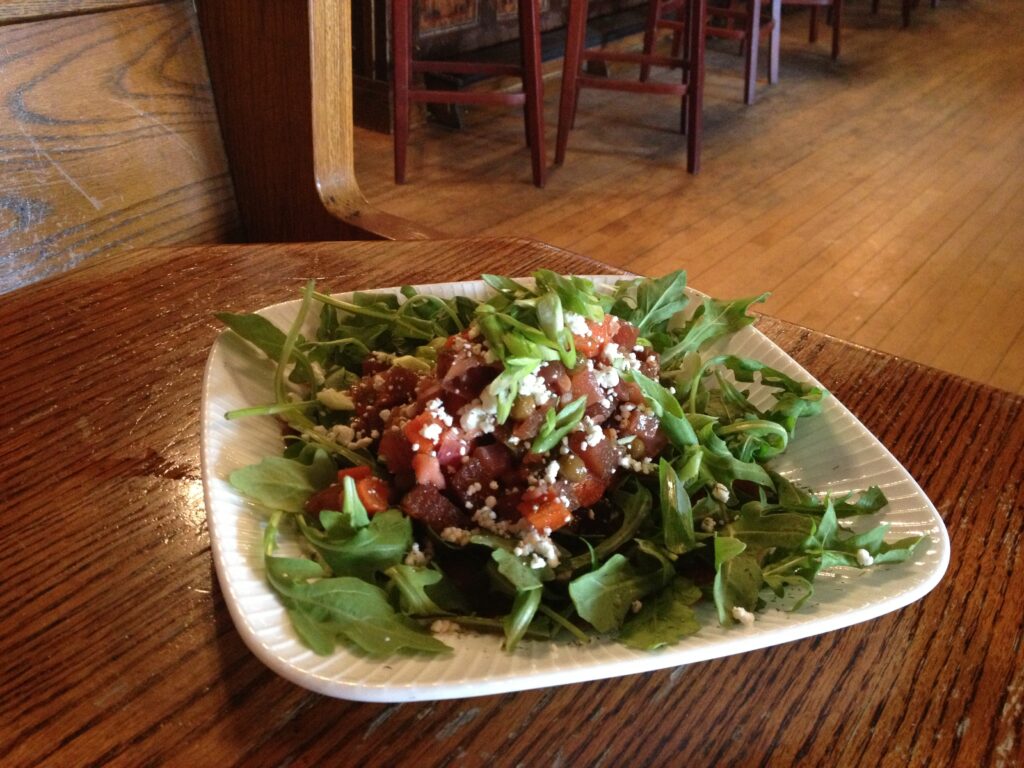 The next dish recommended was the blinchiki, which is a traditional Russian crepe-like pancake, made with local beer, filled and baked.  HandleBar offers 6 different types of blinchiki, but the one I tasted was called gravlax.  Gravlax consists of house-cured salmon, arugula, dill sour cream, and red onion.  The blinchiki was topped with scallions and a bit more sour cream to complete the overall heavenly delight. 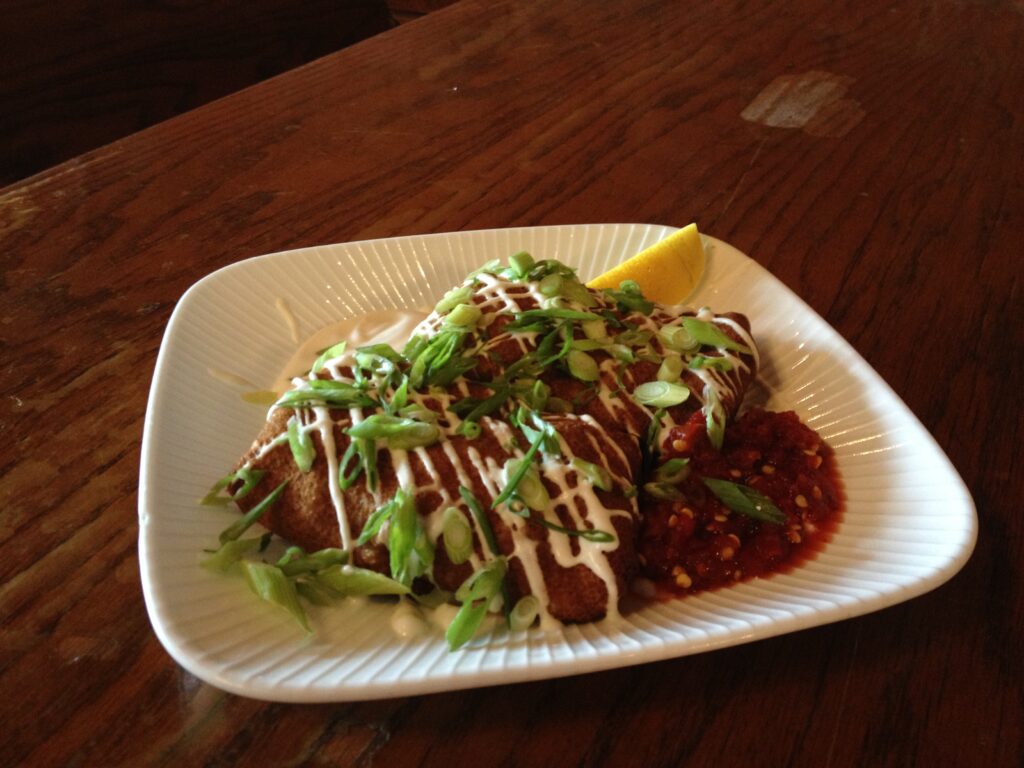 Lastly, Tatyana brought out two of the fan favorite pierogis.  The pierogi on the left came filled with pork, sweet potato, and caramelized onion.  Russia is not known for having sweet potato, but HandleBar felt that was an ingredient that could sweeten the deal. The pierogi on the right is stuffed with the traditional cabbage, mushroom and egg.  Their last pierogi (not shown) is cheesy broccoli potato. The pierogis are perfect for someone stopping in for a drink and a small bite to eat. 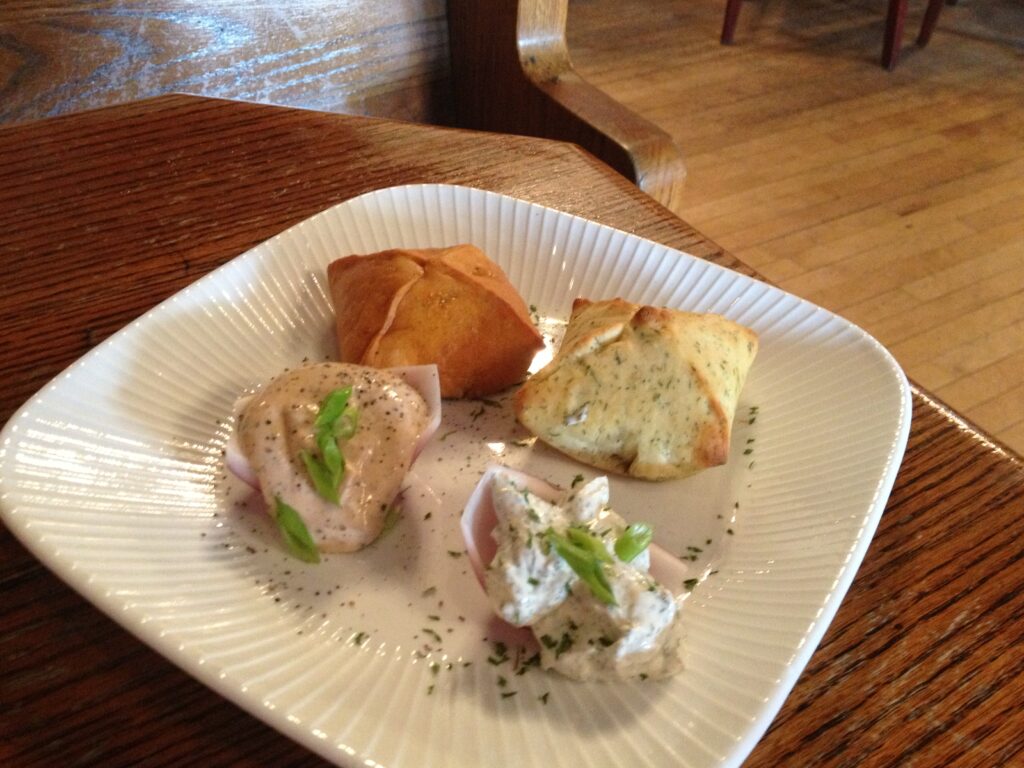 After the visit, it’s apparent that HandleBar’s environment accepts all walks of life.  Their festive decor brightens the gloomiest of days. It’s not only a great place when you feel like a daytime dance party, but also a tasty lunch. So come stop in anytime for a drink, dance, or Russian Delight. 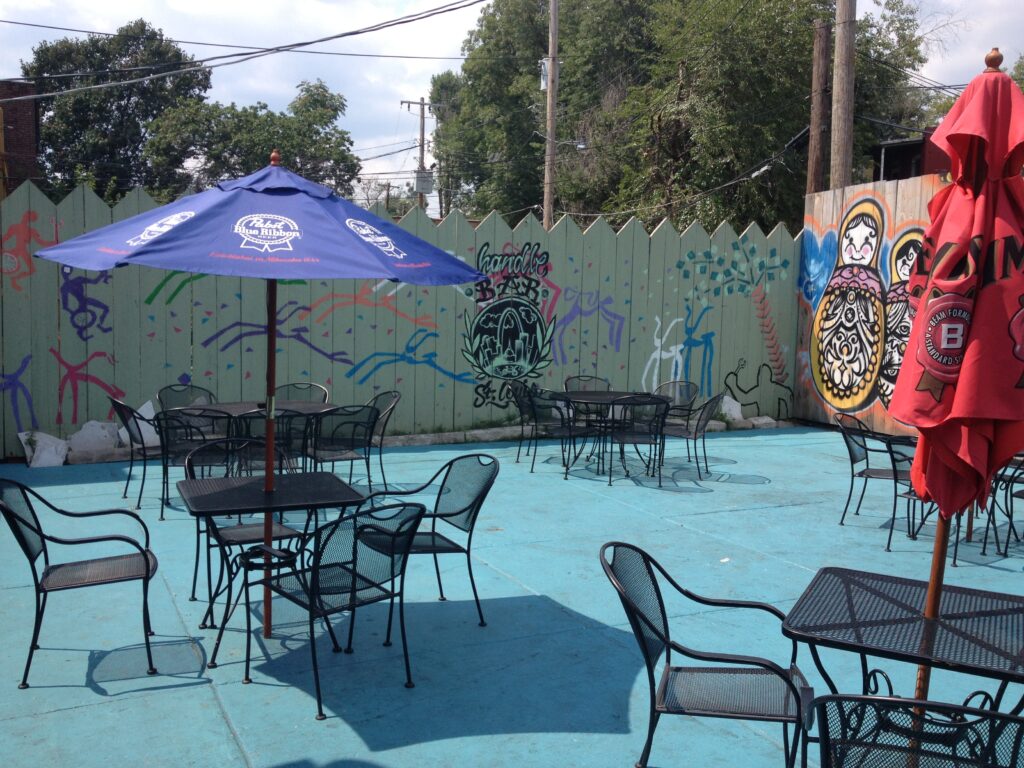 The colorful back patio at HandleBar